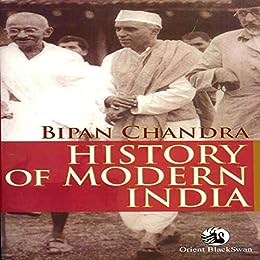 History of Modern India presents an authoritative overview of the history of what was known as British India. The text is largely based on the author’s research on nationalism and colonialism in India and also draws from the works of eminent historians of the period. Challenging and revising colonial and nationalist interpretations of history, this book moves away from a largely political narrative to a social, economic and religious history of modern India. It explains how conditions in India during the eighteenth century helped the British East India Company establish its rule in India. It also gives us important insights into the primary aim of colonial rule which was the economic exploitation of India through trade and investment. The topics are arranged thematically in order to showcase the various forces that went into the making of independent India. However, in the entire arrangement of themes, the chronology of the period is enmeshed innovatively with the various forces that evolved both as a cause and effect of British imperialist rule of the subcontinent. The book also provides a detailed account of the nationalist movement and introduces us to the contributions of different individuals who were behind the nationalist movement. A comprehensive textbook for students of history and interested readers, History of Modern India is essential reading for a broad based understanding of the making of modern India.

Letter To Our Valuable Customers & Community

700+ MCQs with Explanatory Notes For ECONOMY

We will be happy to hear your thoughts

Only because PricePacific love you...

On Every Products. Just register and start buying through PricePacific